Enjoy and remember, if you fancy writing a blog for us please contact us either by email: info@twittervforce.com or via the official #twittervforce twitter feed @VForceHQ

While the Vulcan and VC10 were confirmed early on in the year it was not until mid June that the Viggen alongside the SK60 and J29 from the Swedish historic flight were confirmed. The Viggen is something I have wanted to see and photo for years now, having seen one flying years ago but being rather ill at the time I “sort off” remember seeing it 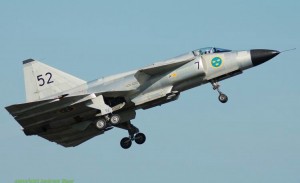 Arriving at Waddington for the first arrival day on the Thursday I had no idea what was going to be turning up when, I had expected the Vulcan to be coming on the Thursday but an e-mail earlier in the week had confirmed this was arriving on Friday. After speaking to a couple of people who were there I turned out the VC10 and Viggen were also due on the Friday.

Friday was an early start with me arriving at Waddington about 8am and a large arrivals plan showed the VC10 due around 10, the Viggen due about 13:30 and the Vulcan at around 15:30. 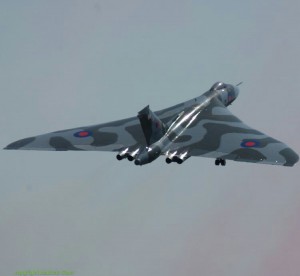 The VC10 turned up and landed without doing any circuits which was a shame as it was one of the last times I’m going to see one flying, still even just seeing it come in and land was nice and the noise from the Four RR Conway engines takes some beating. 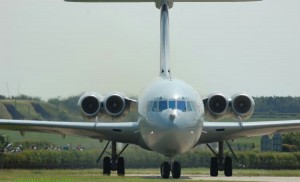 On then to the Viggen arrival after hearing the pilot say he was not doing a circuit it was a case of grab the camera and get some photos of it landing, I had hoped it would go round at least once so I could watch it go around then take photos of the landing but never mind. I had found a decent spot for the landing and was happy enough with the fact I had got a couple of decent shots.

I had been keeping track of the Vulcan in the run up to its arrival on the official @xh558 twitter feed and after taking off from its base at Doncaster 558 did a practice over RAF Scampton before making the short flight over to Waddington. Knowing Kev Rumens was flying on the Friday I was hoping we might get a noisy missed approach and a decent wingover before landing and we were not disappointed. After landing the Vulcan turned round and came back up the runway rather than the taxiway and parked up in front of the park and view area ready for the weekend. 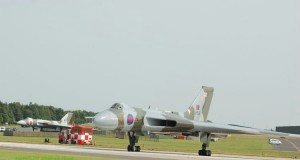 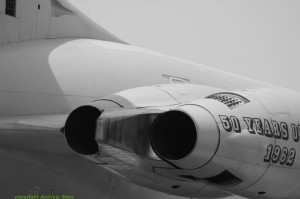 While the Gnats display team were displaying the Vulcan was moved away from the Vulcan Village onto the live side of the airfield as the crew began there preflight checks and start up. As the Vulcan was displaying after the Red Arrows rumors were going around about a Reds and Vulcan fly past, as it happened the Reds did a flypast with a Sential R1. The Vulcan on Saturday was flown by Bill Ramsey with Martin Withers as co-pilot. As the Vulcan made its usual noisy take off and climb out red smoke from the final Red Arrows flypast was still lingering in the sky and this made for a somewhat different photo opportunity. Bill’s display consists of a number of passes, including several with bomb doors open most of which were followed by climbs into fairly aggressive wingovers. The display ended with a missed approach followed by a climb into a wingover before landing as usual the nose being kept up after landing giving a good demonstration of the aero dynamic braking personally I would have liked to have seen the brake parachute deployed but Waddington’s long runway means there is no need for that.

This was the first time I had seen Bill Ramsey display the Vulcan in the past I have seen Martin Withers , David Thomas and Kev Rumens all fly the display and each pilot seems to bring something different to the display which helps to keep things interesting.

After the Vulcans display it was again parked up close to the Vulcan Village and ground tours began again later in the afternoon.

A few hours later the Viggen and the rest of the Swedish historic flight were due to display and the SK60 displayed and landed with no sign of the Viggen or the J29 – after the SK60 landed I overheard someone saying the Viggen and J29 had both gone tech and would not be displaying. By this team the Dutch F-16 was displaying and when this was followed by the Check air force L159 it seemed we would not be seeing the Viggen.

However half way through the L159 display the Viggen taxied out towards the runway and at this point I wondered if we were just going to get a taxi run like we did in 2008 when the Vulcan went tech on the Sunday. 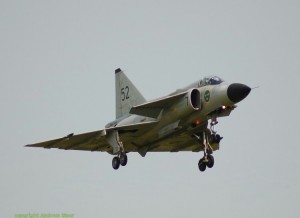 But no the commentator said it was going to fly so at this point I made a mad run to the front of the crowd line and got there in time to get some photos of the take off and display – for a single enginged fighter the Viggen is certainly noisy and the pilot really chucked it around althought not as much as some of the older Viggen displays I’ve seen on youtube. The landing was certainly showed of the types STOL ability stopping after using hardly and runway before taxing and letting the J29 display. So over 2 days I had finally got to photo the Viggen display finally seen it fly seen the VC10 for one of the last times and seen the Vulcan once again a good couple of days and I can’t wait to see the Viggen again later in the year. 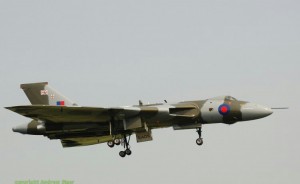