Folks, the latest blog from #twitterVforce comes courtesy of a very good friend of ours.

Anthony has very kindly sent us pictures of various Squadron Insignia and ‘Zapper’ badges that he has accumulated over the years.

I have included Anthony’s bio below so you can see his credentials, in addition to this he has also co written ‘Valiant Boys’ alongside Tony Blackman and contributed to ‘Vulcan Boys’, both of which can be purchased via

Hope you enjoy this little insight into the ‘Vulcan World’ especially as Anthony has added a few little stories to the occasional badge.

‘Tony’ Wright joined the RAF in 1960. After initial training at RAF South Cerney, he trained as a Navigator at RAF Thorney Island, RAF Hullavington and RAF Stradishall (1960-1962), flying the Vickers Valetta, Vickers Varsity and the Gloster Meteor Night Fighter 14.

As a Pilot Officer, and now a Navigator, he served both on Coastal Command and Bomber Command Communications Flights flying the Avro Anson at RAF Bovingdon and RAF Mildenhall (1962).

After completing a weapons course at the Bomber Command Bombing School (BCBS), RAF Lindholme, flying the Hastings, and a course to fly the Valiant at 232 Operational Conversion Unit (OCU), RAF Gaydon he entered the V-Force as a Flying Officer. He served on 148 Sqn as a Navigator Radar flying Valiants a RAF Marham (1963-1965). In 1963 he was selected to fly a Valiant for the Joint Air Reconnaissance Intelligence Centre (JARIC) to trial the first RAF low level flying routes in Canada at RCAF Goose Bay, Labrador. With the sudden demise (metal fatigue) of the Valiants in 1965, he went on to fly the Victor at RAF Gaydon. He converted to the Vulcan at 230 OCU, RAF Finningley and was then posted to RAF Cottesmore, serving on IX (B) Sqn. He was also detached to RAF Tengah, Singapore, RAAF Butterworth, Malaysia and RAAF Darwin and RAAF Amberley, Australia during Indonesian Confrontation (1965-1966). In 1966 he was posted to 35 Sqn, RAF Cottesmore also flying Vulcans and promoted to Flight Lieutenant.

Flight Lieutenant Wright took part in the Strategic Air Command (SAC) Bombing Competition in Washington State, USA in 1966, and was selected again in 1967. That year he flew westabout, via the Pacific, to Singapore and back. He became Navigator Radar Leader on 35 Sqn in 1968. He took part in regular detachments and training exercises all over the world – Australia, Canada, Cyprus, France, Germany, Gibraltar, Italy, Libya, Malaysia, Malta, Norway, Singapore and the USA. He had become one of the very few who could claim to have flown all three V-Bombers.

In 1969 he was posted to RAF Tengah, Singapore, as Station Intelligence Officer, and in 1970 served on the staff of the Commander-in- Chief Far East in the War Room at the Tri-Service HQ Far East Command, Singapore until the withdrawal of the British Forces in 1971. On return to the UK he completed the Staff Navigation Course at RAF Manby, flying Dominies, and became Station Navigation Officer and Combat Survival and Rescue Instructor at the RAF College Cranwell (1971-1975), flying Jet Provosts. During that time he completed Sea, Land and Winter Survival Courses in the UK, Canada and Germany, two Jungle Survival Courses, one of which was with the Malaysian Infantry in Malaysia and various escape and evasion and interrogation exercises. The most challenging escape and evasion exercise was with the SAS in the Pyrenees. In 1975 he was posted as an instructor to 230 OCU at RAF Scampton, flying Vulcans and Hastings, instructing on radar navigation and bombing for Vulcan, Victor, Buccaneer and Phantom aircrew (1975-1978).   He took part in the Icelandic ‘Cod War’ flying nine and a half hour sorties in Hastings spotting the Icelandic gun boats and reporting their positions to the Royal Navy ships patrolling the area so that the RN could intercept the Icelandic ships and thus protect our fishing vessels. He also carried out regular Oil Rig patrols in the North Sea in both Hastings and Vulcans. He was promoted to Squadron Leader in 1978.

Squadron leader Wright served in Flying Wing as Squadron Leader Bombing and Navigation Systems Officer at RAF Waddington (1978-1981). He then served on 50 Sqn, RAF Waddington as Navigator Radar Leader flying Vulcans and was selected for the Red Flag night flying and bombing exercises in Nevada, USA. During the Falklands War he was detached to the War Headquarters at RAF Northwood for Operation Corporate as Vulcan adviser and helped plan and execute the Vulcan Black Buck raids on the Falkland Islands. After the Falklands conflict his squadron, the last remaining Vulcan Squadron, was converted to the Tanking role when he became the first and only Vulcan Tanker Leader. On disbandment of 50 Sqn on the 31st of March 1984 he was posted to the Nuclear Directorate in the Ministry of Defence, Whitehall. In 1987 he was posted to the RAF Armament Support Unit, based at RAF Wittering, where he was Second in Command and also Officer Commanding Training Squadron, responsible for the training and standardisation of all RAF aircrew and engineers specialising in the nuclear role.

In August 1998 he secured a post at Headquarters Air Cadets, RAF Cranwell which was responsible for both the Air Training Corps (ATC) and the Combined Cadet Force (CCF) RAF. He was commissioned again, in the same rank, this time as a Squadron Leader in the Royal Air Force Reserve (RAFR) in a post entitled Squadron Leader Corporate Business. He decided to finally retire on the 1st of January 2003 – his 61st birthday.

As you can see, it is an honour and pleasure to know Anthony, and with a service history to our country that he has, he has the utmost respect from us here at #twitterVforce

Sir, we salute you 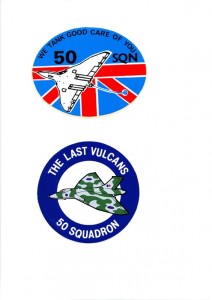 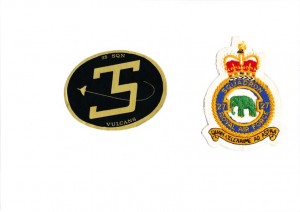 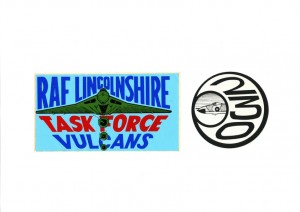 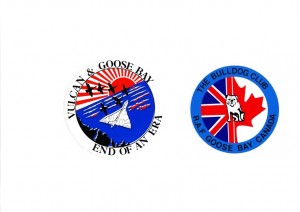 Waddington Zapper and 25th Anniversary of Vulcan At Scampton 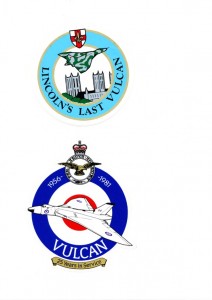 (I attended the 25th Anniversary of the Vulcan in 1981 at Scampton and showed Roy Chadwick’s Elder Daughter around and in Vulcan.)

(I went on Red Flag at Nellis AFB, Las Vegas in 1982 as the 50 Sqn crew. Stayed in 2 Casinos for a few weeks! Most of us 5 RAF crews there were involved in the Falklands shortly after. These are the patches that we wore on our 50 Sqn crew). 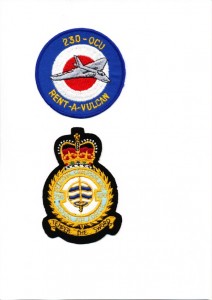 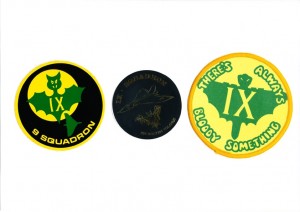 (I was on IX(B) Sqn, Vulcans, at Cottesmore 1965 – 1966. Official motto ‘Per Noctum Volamus’ (We Fly By Night) Unofficial motto ’There’s Always Bloody Something’. These zappers much latter. Also on Tornados).

Note top one is a tanker with HDU (Hose Drum Unit) underneath tail. Hose in. The Omega signifies the end. 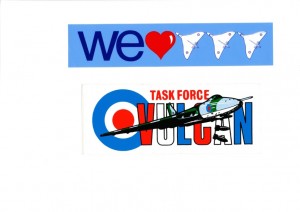 (Zappers the public loved for their cars). 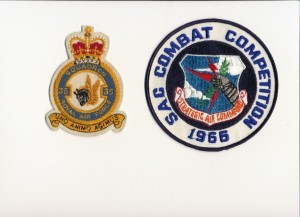 (I was one of the three crews from RAF Cottesmore that took part in the 1966 SAC Bomb Comp in the USA, at Fairchild AFB, in the Johnnie Appleseed State of Washington. I was on 35 Sqn Vulcans. Hence my 35 Sqn and the SAC badges that we wore on our flying suits. I was chosen again in 1967 and the Bomb Comp was re-named Giant Voice. As we stepped out of the a/c on our very last training flight at Cottesmore we were told by our Sqn Cdr that the competition had ben called off by the Americans because of the Viet Nam war. A lot of our ground equipment had already been sent to the States by sea!

Whole story is in ‘Vulcan Boys’). 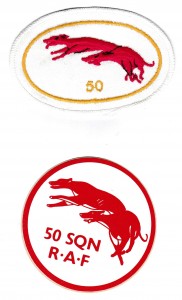 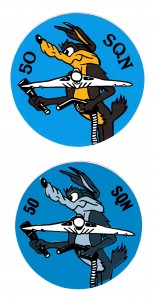 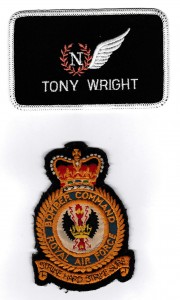 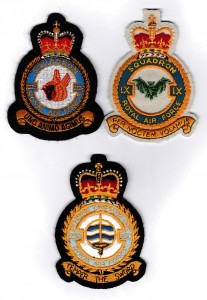 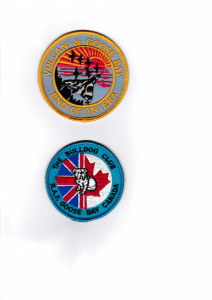 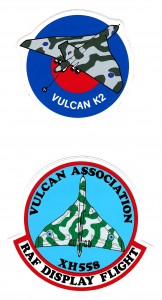 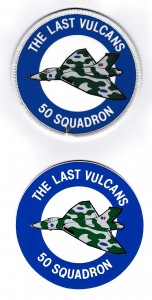 Just a zapper given on my travels 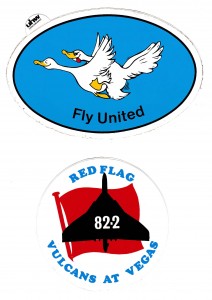 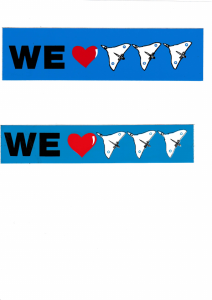 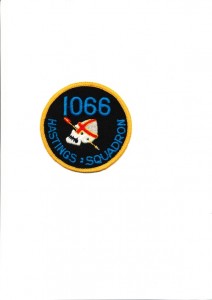 1066 badge. The reason: Bomber Command Bombing School (BCBS) RAF Lindholme, Doncaster Yorks near RAF Finningley, and now a prison, taught Nav Radars for all three V’s when they were bombers. Consisted of Ground School and then flying in Hastings a/c (one at Newark Air Museum). Staff crew at front. 2 pilots, nav and engineer. Down the back V-Bomber Radar bombing kit. One Nav Radar Instructor and a couple of students.

When RAF Lindholme closed the School, plus Hastings a/c, moved to RAF Scampton and became part of the Vulcan 230 OCU. Although actually a Flight, the Hastings lot called themselves unofficially a Sqn. Because they flew Hastings they called it 1066 Sqn! Hence Harold with an arrow in his eye.

I tell the story in ‘Vulcan Boys’ and also what we Nav Radar Instructors did as well as teaching V-Force students on Vulcan and Victor (we taught radar to Phantom and Buccaneer Navs as well on the radar), the Cod War and Oil Rig patrols.

My 148 Sqn badge is still on one of ‘ye olde’ blue flying suits in the roof somewhere. Never took it off for sentimental reasons. When I get re-united with it I’ll photograph sometime