So, after a conversation on Twitter at the beginning of 2016, and a visit to Newark Air Museum just before Christmas 2015 (courtesy of my parents, who I seem to have made into plane geeks!), I offered, via Rod, to make a cake for the V-Force Reunion there this May.

Not just any cake. A Vulcan cake. Specifically, an XM594 cake.

So, how do you make a cake shaped like a Vulcan?

First of all, I had to decide how big it should be. The limiting factor here was the size of heavy duty cake boxes for transport – pointless making a cake if we couldn’t actually get it to Newark – and it turned out the biggest size easily available took an 18” square cake board. 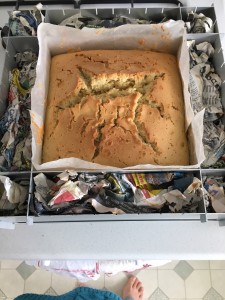 As for the cake itself, I settled on a vanilla madeira; madeira is dense enough to support the icing, and also take the complex carving a Vulcan shape needs. [Fruit would be too lumpy, and some people don’t like chocolate cake. A traditional madeira would be lemon, but I’d have to zest far too many lemons for that.]

A sponge cake should be 2” smaller than the cake board it’s on. As a Vulcan’s largest dimension is its wingspan, this gave a target cake wingspan of 16”.

For shaping the cake, I had actual blueprint images to make into cutting templates, and the team at Newark sent me many photos of XM594 from various angles for me so I could get her right. So, I scaled the blueprints and printed them out to make my templates – in A3. Gulp. I knew it was going to be big, but I hadn’t visualised quite how big till then! 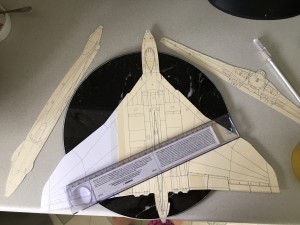 The next task was to work out how to assemble a Vulcan from madeira; at 16” wide, multiple bakes were a necessity, but I wanted to have as few separate cakes with as little wastage as possible.

A Vulcan may be a delta, however, it’s only when you try and fit bits of it into a square that you see just how much the B2 wing varied from the original, true delta planform. 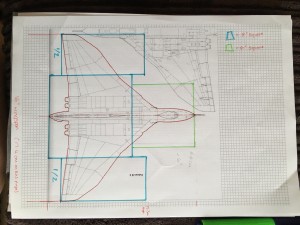 I calculated that 2 x 8” square cakes (wings and central fuselage), plus an additional 6” square (mostly nose and cockpit), would do the trick. This meant I could make it in stages: each madeira (even the small 6” one) pretty much took a day to prepare, mix and bake. Once cooled, each cake was well wrapped and placed in the freezer, ready for assembly day.

After a lot of thought, and research, I planned to cover the carved cake in white fondant, let it dry, then paint her camouflage on freehand. The vertical stabiliser would have to be painted freehand anyway.

For the vertical stabiliser, I had to make that well in advance using pastillage. This, if you’re interested, is a type of icing which dries rock hard and is the least affected by humidity or temperature (compared to flower paste, for example). However, it forms a crust very quickly, making it a pain to shape, and it’s also very brittle once dry – as I learnt with TSR2 when I kept snapping bits. But after a bit of practice (and sandpaper for final shaping once dry) I ended up with reasonably representative vertical stabilisers. 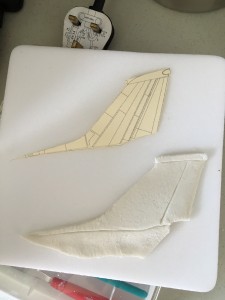 Painting my first pair of vertical stabilisers provided the first trial of the icing paints: a set of gel colours which can be mixed in various ways to produce almost any colour you like.

So I knew where to paint, I marked out as best I could the camouflage pattern on the dried pastillage with a grey food safe felt pen. For her other markings and squadron badges, I used more food safe pens to make sure I can capture the finer detail. (Food safe felt tips are awesome.)

I ventured online and saw LOTS of discussion regarding correct Vulcan paint colours, not much of which was helpful from an icing perspective. In the end, the best way to match colours was the Mk1 eyeball and numerous photos of XM594 herself. 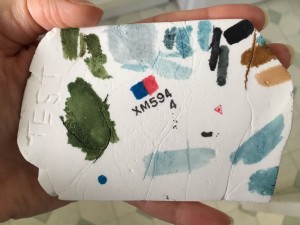 Various experiments later, and I finalised colour recipes for forest green, medium sea grey, and the browny-gold of the aerial locations. For some reason, the sea grey was the WORST to replicate. 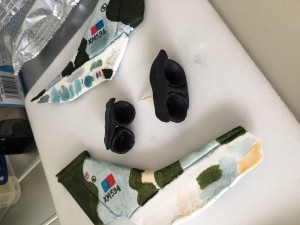 [If anyone is particularly interested in the exact details, just ask me – I will be developing a Victor tanker khaki, and probably a Typhoon grey, at some point soon as well.]

Anyway, with the help of some photos from Rod and John, I somehow managed to use black flowerpaste to sculpt what Dave called a pair of gorilla noses which were a set of Olympus 301 tailpipes that would sit in slots on the back of the cake. I even made them different for port and starboard. Once dried, the outer surfaces got dusted with silver edible dust (so the inside of the tailpipes was black, the outside silver).

In the meantime, I’d decided to ice the cake board in a kind of sky effect (as I did for TSR2 ), just because I felt it would look a bit better than a plain silver board. When I did the trial bake, I realised we had quite a bit of free space at the front by the nose, so I messaged Rod to suggest we put the #tVf and #NAMTributetoVforce logos on for the final product.

Once the cake board was iced and had had a day or so to dry, it was cake carving and assembly time. This was the most complex single operation with multiple steps:

For various reasons, I was behind starting the trial cake. Things got even more complicated when, trying to level the (still frozen) trial cakes for assembly, I sliced two of my fingers badly enough to require a trip to A&E.

At this point Dave, probably not wanting to see me hack anything else off myself, wondered if a putty knife would be useful for cutting and carving the cake.

He fished out one of his, washed it, and we tried it on some of the cake offcuts. To our surprise, it worked far better than expected – so we went out and bought a brand new putty knife, purely for cake use.

Seriously, if you’re new to the whole cake carving thing, a putty knife makes it very easy to carve complex shapes. Plus, it spread buttercream evenly over the carved cakes with minimal effort. (You may need to sharpen the edges a tiny bit, though. Just make sure you buy a stainless steel one.)

Once the cake was carved and thoroughly covered in buttercream, the next task was to roll out the fondant icing (over 1kg of it – which took some rolling) and gently cover the assembled cake in it. Once I smoothed the fondant over the cake, I added details, shaped around the cockpit and defined panel lines, referring to photos and the model. 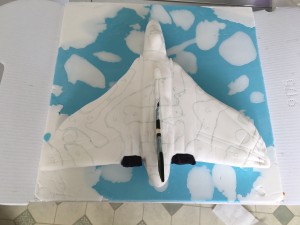 I also wedged the vertical stabiliser into the slot I cut in the cake and fondant – and it fitted. And it stayed upright. Without wobbling or snapping. The black flowerpaste tailpipes also fitted into their slots with no issues.

Then, the icing had to dry before the next stage – painting.

This was the fun part. Now, anyone who’s listened to Craig Bulman (or read his excellent book) will know each Vulcan is unique – and I was keen to make this cake specifically XM594. Thankfully, Rod and the team at Newark provided me with many pictures of XM594 from various angles.

My next task was to draw her camouflage on. Freehand. And by eye. 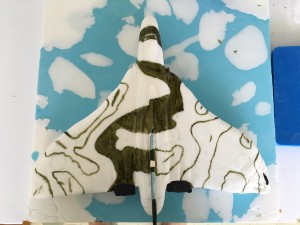 I used a grey icing pen (as I did on the vertical stabilisers) to sketch on the rough lines and mark which colours went where. On the final cake, I had a last-minute panic when my grey felt pen ran out partway through marking her up – requiring a 30 mile round trip to dash to the nearest place I knew would have them in stock!

Then, it was painting time. Thankfully, the recipes I developed for the vertical stabilisers did indeed prove repeatable, and I carefully followed my lines to colour her in. First, a couple of coats of green, and then the sea-grey after a few hours of drying. I used felt pens to colour her roundels and add a few other details, and painted her intakes black. 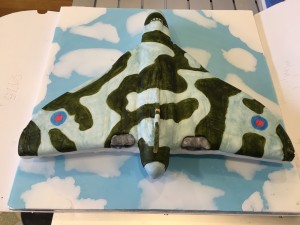 A cocktail stick, painted with a couple of coats of different blue and silver nail varnishes, doubled as her refuelling probe.

And then … we had a cake. A Vulcan cake. 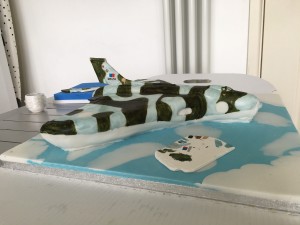 I carefully stuck on the edible icing logos Rod sent me a few days earlier, and relaxed a little – though I didn’t breathe a full sigh of relief until we safely delivered Cake XM594 to Newark that Saturday. 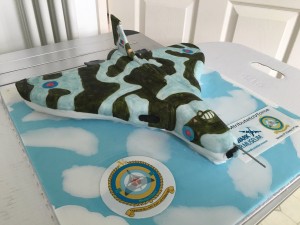 I was honoured that Vulcan Test Pilot Tony Blackman OBE, MA FRAes and Squadron Leader Anthony Wright BA unveiled the cake – and even more so when the cake was ceremonially cut on Saturday afternoon by Squadron Leader Dick Russell (of Black Buck 1 fame – I think he enjoyed the opportunity to hack a Vulcan to bits!). 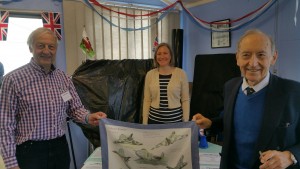 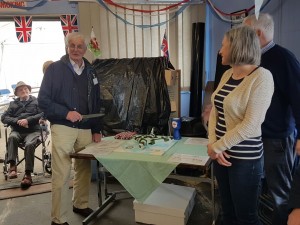 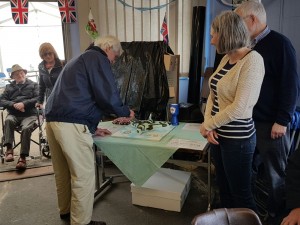 It was humbling to hear the frequent “wow” and “look at that cake!” from those passing. I was just pleased to have made a cake which was definitely a Vulcan and recognisably XM594 (from her vertical stabiliser, at least).

In return for a slice of the cake, we asked people to contribute to Newark’s Project Panini – fundraising for their new café facilities.

I found it interesting that people really didn’t want to hack through the cake fuselage – maybe it was a bit too Vulcan like for comfort! 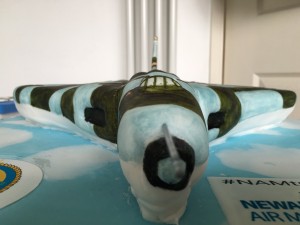 I would like to thank all at Newark Air Museum for their hospitality, and especially Howard Heeley for his help with images of XM594, and also the fact he trusted me (a complete stranger!) to make such a cake for their special occasion. 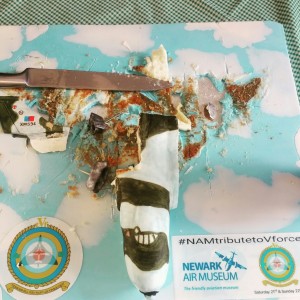 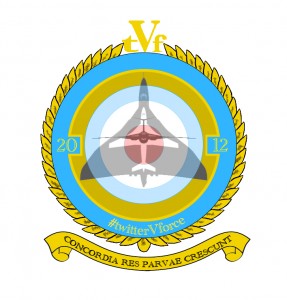